It seems the Emerald City is finally shedding its “Seattle-Freeze” image—a long-held perception that Seattleites are cold and distant with only a veneer of warmth.

Seattle now ranks 8th among the 25 most neighborly cities in the country based on factors like charitable giving, volunteering, happiness levels and what it means to be a good neighbor, according to a new survey by Neighbor.com.

Due primarily to charitable giving, Seattle, home to Amazon and the iconic Space Needle, jumped up five spots from No. 13 in 2020.

With a population 270,000 residents, Madison, Wisconsin, topped the list as the most neighborly city in America.

An absentee from last year’s list, Madison was awarded this accolade for leading the country in the number of nonprofits per 100,000 residents. It also boasts a low crime rate, giving residents there a sense of security.

Rounding out the list at No. 25 is San Francisco. The Golden Gate City ranks 5th in the nation for nonprofits.

Respondents, meanwhile, determined that being neighborly includes: doing at least one favor per year for their neighbor and spending time with them a few times a year. In the wake of COVID-19, more than 40% of those surveyed say they are more likely to start relationships with those who live nearby, so they can look out for one another. 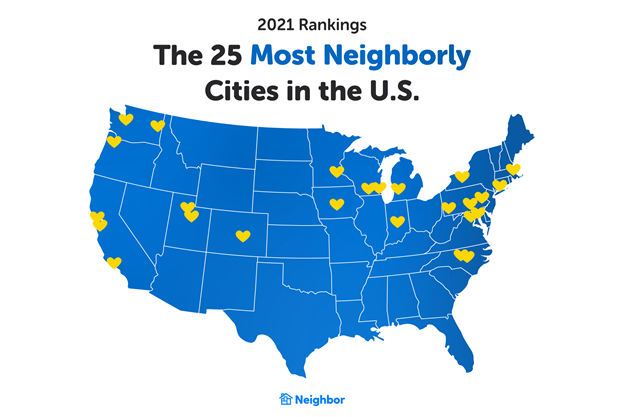