Graffitti on a rusted metal cleat in gasworks park in seattle. 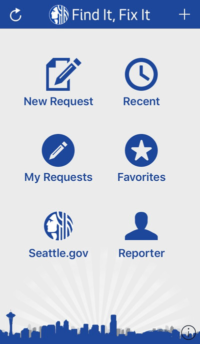 Dubbed the “Emerald City,” Seattle is surrounded by stunning natural beauty, including majestic Evergreens and sparkling Puget Sound. Still, that doesn’t mean that every square inch of the place is pristine.

Taggers, hoping to leave their mark — quite literally — have marred and maligned street signs, bus stops, freeways, public buildings, even private property. Some call it acting out their frustrations, others refer to it as the zeitgeist of our age. Few call it art.

What goes undisputed, though, is that the widespread graffiti is now an indelible part of the Seattle landscape, so much so that the city is on track to exceed last year’s tally.

According to The Seattle Times, some 14,000 reports of graffiti were made to the city’s Find It, Fix It app, which  offers mobile users a way to report selected issues to the City of Seattle, including tagging.

The app itself is easy enough to use — even for time-strapped real estate agents always on the go. Just snap a photo with your smartphone, add detailed information, and hit submit. That’s it.