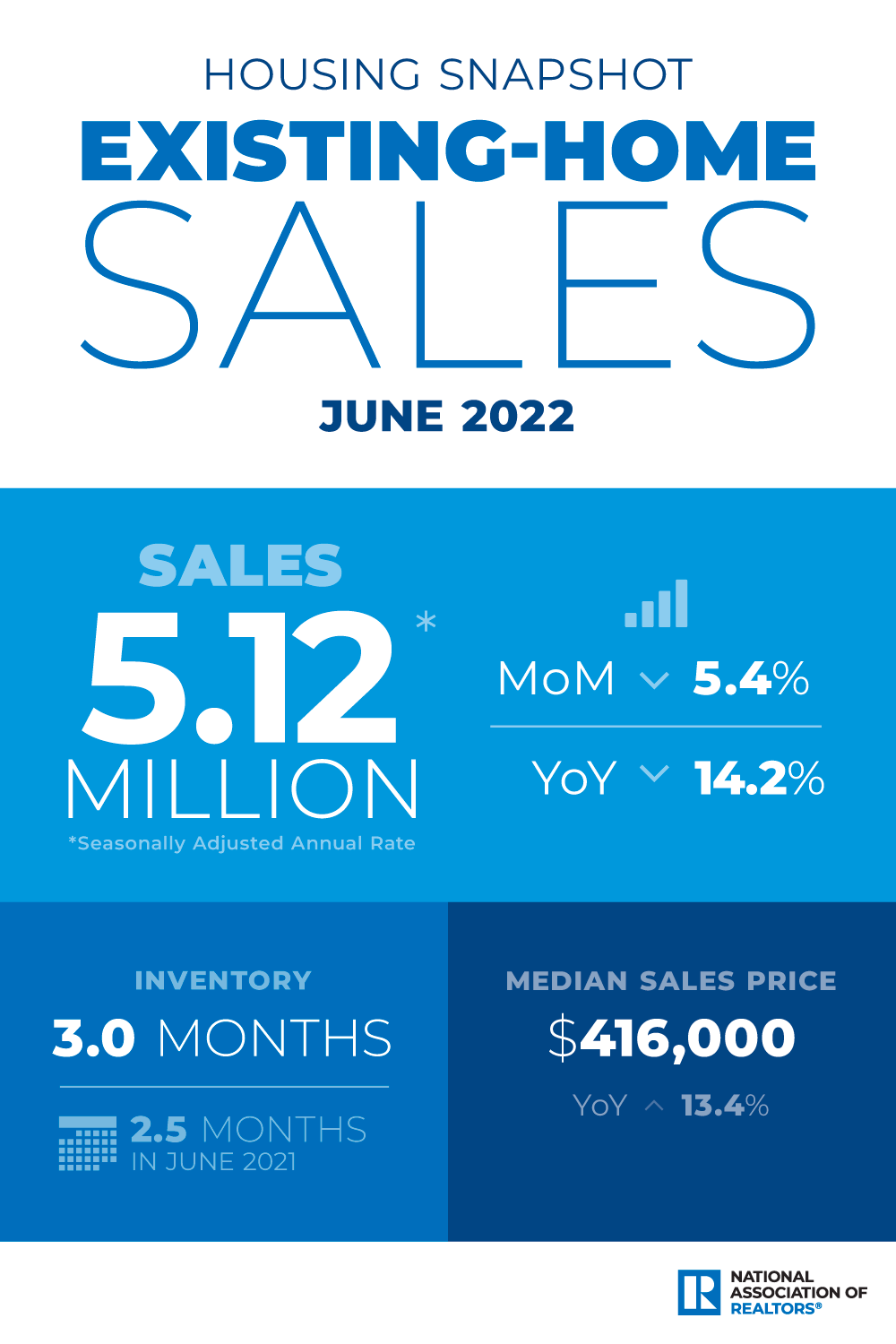 Existing-home sales fell for the fifth consecutive month in June as homebuyer purchasing power was sapped by higher home prices and interest rates, the National Association of REALTORS® said.

At the same time, total housing inventory rose 9.6% on a month-over-month basis to 1.26 million units.

Total existing-home sales, which are completed transactions, including single-family homes, townhomes, condominiums and co-ops, slid 5.4% from May to a seasonally adjusted annual rate of 5.12 million in June. Year over year, sales volume was down 14.2% from 5.97 million transactions in June 2021.

“Falling housing affordability continues to take a toll on potential home buyers,” NAR chief economist Lawrence Yun said in a press release. “Both mortgage rates and home prices have risen too sharply in a short span of time.”

The median existing-home price for all housing types in June was $416,000, up 13.4% from a year before, as median prices rose in each region.

“Buyers and sellers hate uncertainty, and that’s what we’re seeing play out in June’s existing-home sales data,” said Neda Navab, president of national brokerage operations for Compass. “Prices continue to rise rapidly, a sign that plenty of serious and qualified buyers are still out there. Rising prices may also be a looming threat that, combined with rising mortgage rates, could represent a one-two punch that may further dent sales volumes throughout the year.”

June’s unsold inventory represented a 3-month supply at the current sales pace, up from 2.6 months in May and 2.5 months last year.

“Finally, there are more homes on the market,” Yun said. “Interestingly though, the record-low pace of days on market implies a fuzzier picture on home prices. Homes priced right are selling very quickly, but homes priced too high are deterring prospective buyers.”

By property type, single-family home sales in June slid to a seasonally adjusted annual rate of 4.57 million, down 4.8% from 4.8 million in the previous month and down 12.8% from a year earlier. The median existing single-family home price was $423,300, up 13.3% on a year-over-year basis.

“We are now seeing some evidence of inventory levels starting to pick up across the country, but still consistently below pre-pandemic levels,” Keller Williams chief economist Ruben Gonzalez said. “It seems likely that we will return to a pace of home sales more consistent with pre-pandemic levels, but we also see long-term demographic trends which will continue to keep demand for homeownership growing over the next decade.”

NAHB: U.S. in a “housing recession,” single-family starts will decline in 2022